TechEd/developers 2008 was a lot of fun, and extremely tiring.  The combination of plans gone astray, unplanned events, and things which couldn't be planned for kept life interesting.

As at SD West, we had announced that we'd be giving away Fortress licenses to those who could beat Jeremy at Guitar Hero.  Gauntlets were thrown. Smack was talked.

And then Jeremy had to fly back home, unexpectedly, before the show started.  Our Artistic Director, John Woolley (the man behind the Evil Mastermind) bravely stepped into the breach and took on all comers.

John's good, but by his own admission not freakishly good like Jeremy.  He still turned in a near 50/50 win/loss ratio.  It probably would have been higher if I hadn't stepped in for a few rounds.

The gallery of winners can be seen at flickr

Also, it certainly seemed like 900 shirts would last at least a few days.  As opposed to barely squeaking through the first day.

Things I learned while setting up for the show.  Or, things which should have been completely obvious beforehand:

Fun times.  All worked out eventually.

We did slightly, of course.  But Jeremy was our bass player, so some additional uncertainty was thrown in.  An Expo day pass for my brother gave us a ringer on drums, at least :-)

So up we go, Eric on acoustic guitar, me on the Evil Mastermind Schecter, Brad on drums, and a cast of several on guitars, keys, bass, percussion.  All watching and listening as we shouted or showed chord changes.  And it went pretty well just the same.

Sadly, the battery died in the camcorder a minute and a half in.  Also not according to plan.  But here's what we do have: 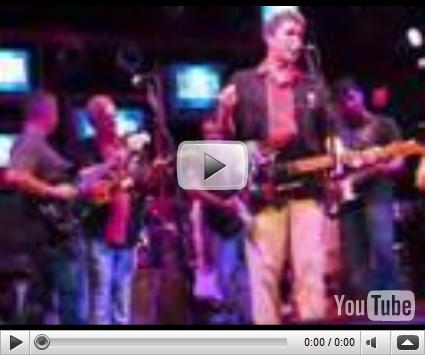 PDC and DevConnections in the fall.  Plenty of time to plan.