So how does the Wiki module work, anyway? Pretty much the way you’d expect a web app to work.

All of the Veracity-specific stuff happens on the server side.

We retrieve the existing page in the GET /wiki/pages/<pagename>.json route (mentioned in Part 2 the other day). Normally (q.v.), that’s as simple as:

Which translates to “Open the wiki database, find any records matching our pagename, grab their text, title and recid fields, and return the first one.” We can get away with this since our database template requires the pagename to be unique.

A JSON representation of that object is returned (you’ll also see some caching logic in there, but that’s strictly a performance measure, ignorant of the Wiki data).

We then return OK to our caller, the page is reloaded, the circle of life continues.

So what’s up with the changeset ID, and why did we have to say “normally” before?

It’s possible that, by the time you’re saving your changes, someone else has updated the same page. Or maybe your changes are in a nice straight line locally, but a push or pull brings in someone else’s previously-unknown edits. Veracity doesn’t get to throw up its hands and fail. It needs to merge.

And to merge your changes and mine, it needs to know where we each started from. That’s why we pass the changeset IDs around; it tells Veracity “here’s my latest changes, and the last version I knew of was rev 1234”. Later, when Veracity merges that with someone else’s updates, it knows those were based on rev 1235; it finds a common ancestor, does a smart 3-way merge, and all’s well. Almost always.

“Almost always” is not “absolutely always”, though.

What if we both started with:

as our text. Then I edited it to read:

while off on your machine, you edited it to:

Then you pull my changes. Now what? Should your changes be thrown away? Should mine? Should both lines be included? Any of these are possible, but in the template we have to pick one.

The “merge strategy” the Wiki template uses is to concatenate our two texts, and let a human being sort things out. Elsewhere (e.g. in the scrum module) we use all sorts of other strategies, including automatically changing the ID of a work item when it conflicts with one created elsewhere). Since Wiki text is intended for human usage only, and is completely arbitrary, there’s no sense trying to guess the “appropriate” conflict resolution between two edits.

So in this situation, anyone opening the merged page will see: 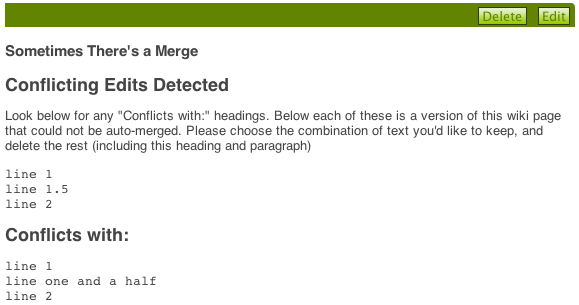 Edit that as needed, and all’s well with the world again.

Next (and hopefully final) time: plugging into Veracity’s activity stream and cache.